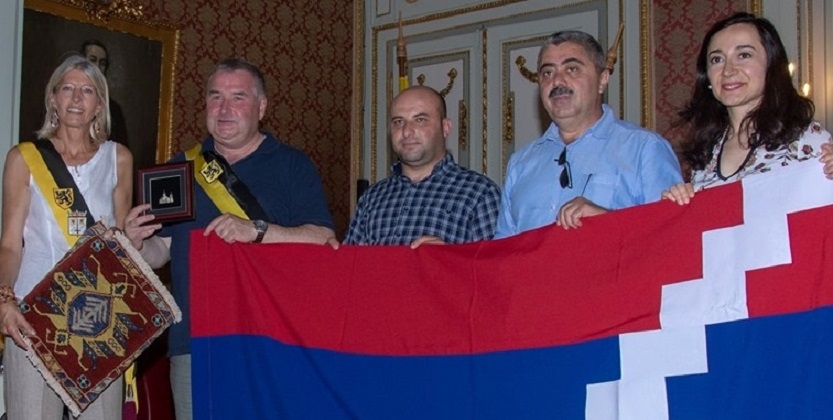 On the initiative of the European Armenian Federation for Justice and Democracy (EAFJD), a delegation representing Shahumyan region of Artsakh Republic (Nagorno Karabakh) visited the Belgian city of Aalst.
The delegation had been invited by the city council of Aalst so as to attend the annual Pikkeling-festival, one of the most popular international folkloristic festivals in Flanders as well as other cultural and sports events taking place in the city from 26 to 29 July.

During the official opening of the festival Karim Van Overmeire, the first Alderman (vice-mayor) of the Aalst city council who has visited Artsakh twice, welcomed the presence of the Armenian delegation along with other invitees, representing cities from India, Martinique, Puerto Rico, South Africa and Ukraine.

The Artsakh delegation held a number of meetings with the members of the Aalst city council from different political parties. On 29 July, Christoph D’Haese, the mayor of Aalst, received the delegation. During the meetings several issues including good governance and exchange in the field of culture and tourism were discussed.

Pointing out the crucial importance of decentralized cooperation for the people of Artsakh, the EAFJD President Kaspar Karampetian stated:

“Such exchange is vital in order to break the total isolation imposed on the people of Artsakh by the Azerbaijani government and to create basis for future cooperation. We are grateful to friends, such as Karim Van Overmeire for being a true bridge between our societies.”

“Human rights are valid for everyone irrespective of the official status of the country. It is the legitimate right of the people of Artsakh to develop ties with the rest of world.”

The visit was also rich in cultural activities. Besides attending the festival of Pikkeling, the members of the delegation had an opportunity to get acquainted with the history of Aalst, visit some of its most important sites including the impressive library and music academy “Utopia”, the city Museum, the language school Taalbubbels and be present at the official opening of the cycling race “Criterium Aalst’’.

The representatives of two cities decided to continue developing the cultural collaboration in the future.