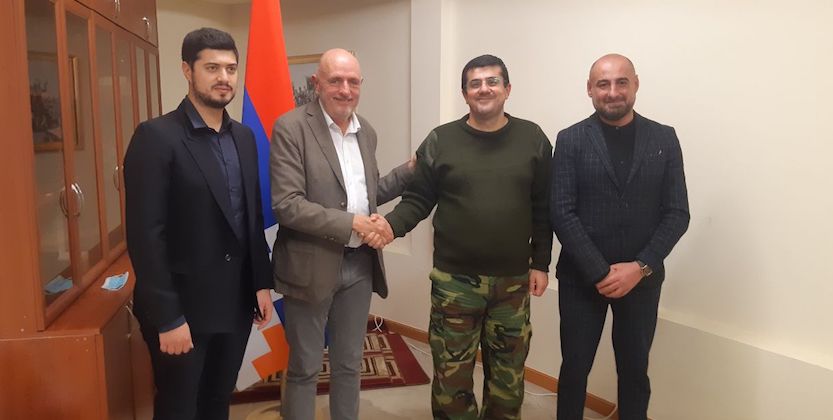 On the joint initiative of the European Armenian Federation for Justice and Democracy (EAFJD) and the Comité de Défense de la Cause Arménienne (CDCA Belgique), Georges Dallemagne, a member of the Federal Parliament of Belgium as well as a group of Belgian journalists visited Artsakh/ Nagorno Karabakh. Georges Dallamagne is one of the first European MPs who has visited Artsakh after the aggression unleashed on the people of Artsakh by Azerbaijan.

The Belgian delegation was accompanied by the EAFJD Communication and PR officer Harout Chirinian and the former Chair of CDCA Belgium Peter Petrossian. During the visit, Georges Dallemagne met with Arayik Harutyunyan, the President of the Republic of Artsakh, Massis Mayilyan, the Minister of Foreign Affairs, Arthur Tovmasyan, the Speaker of the National Assembly and Artak Beglaryan, the Human Rights Defender of Artsakh.

At the meeting with President Arayik Harutyunyan, Georges Dallemagne said:

“I brought with me the support to the people of Artsakh on behalf of the members of the Belgian French-speaking friendship group with Artsakh and that of many Belgian colleagues. The people of Artsakh are heroically defending themselves from the Azerbaijani army. It is supported by jihadists and the Erdogan regime, which are common enemies of our two democratic people. Europe must do everything to stop the massacres and war crimes against Armenians”.

The delegation also visited civilians who had been transferred to hospitals after the Azerbaijani shelling of civilian facilities in Stepanakert and in nearby civilian settlements. Georges Dallemagne also had the opportunity to have an exchange with Armenian families internally displaced from the villages occupied by the Azerbaijani armed forces today. They now live in Stepanakert, hiding in shelters from the continuous shelling.

On their way to the Republic of Armenia, the delegation witnessed the damage caused to the Holy Savior Ghazanchetsots cathedral in Shushi as well as the complete destruction of Shushi Cultural Center, both by the shelling from the Azerbaijani side. The delegation also met with families from Artsakh who had taken refuge in the border town of Goris.

“We are grateful to the members of this delegation, as they resolutely decided to come to Artsakh during this war to shed light on the threat the native Armenian population of Artsakh is facing. Today, the heroic people of Artsakh are repelling the pan-Turkic ambitions of the new Turkish sultan Erdogan and of Azerbaijan’s dictator Aliyev. In these conditions, the only acceptable solution to guarantee the physical safety of the people of Artsakh is the recognition of the Republic of Artsakh.”

In Armenia, MP Georges Dallemagne will pay a tribute to the victims of the war at the Yerablur military cemetery and he will be received by the President of the Republic of Armenia Armen Sarkissian.