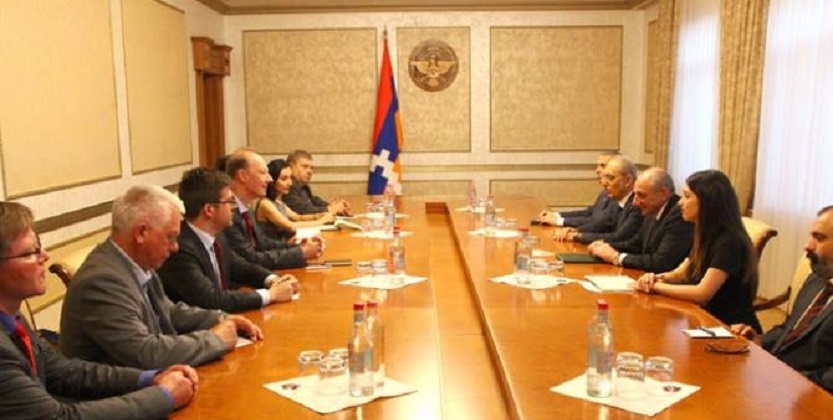 Stepanakert, 29 August 2018 – On the initiative of the European Armenian Federation for Justice and Democracy (EAFJD), Martin Sonneborn (NI, Germany), a Member of the European Parliament (MEP), his head of office Dustin Hoffmann and journalist Claudia Toursarkissian are on a fact-finding mission in Artsakh/Nagorno-Karabakh, accompanied by EAFJD President Kaspar Karampetian and EAFJD executive director Heghine Evinyan.

Within the framework of the visit, the delegation led by MEP Sonneborn has been received by the President of the Republic of Artsakh Bako Sahakyan, Minister of Foreign Affairs Masis Mayilyan, Minister of culture, youth and tourism Lernik Hovhannisyan, the Speaker of the National Assembly Ashot Ghulyan and a number of deputies representing all the political fractions in the Parliament. MEP Sonneborn and his staff also had an exchange of views with members of the “Friendship Group with Europe” of the Artsakh National Assembly.

During the meetings, the importance of such fact-finding missions was emphasized as a contribution in breaking the isolation imposed on the people of Artsakh and obtaining first-hand information about the reality in the country and the democratic developments in it.

The sides discussed the issue of the Azerbaijan – Nagorno-Karabakh conflict and the role that the European Union and its member states should play in the peaceful settlement of the conflict. It was stressed that no sustainable solution to the conflict could be found without actively engaging the people of Artsakh in the peace process and without listening to them.

The sides mentioned also the extreme importance of having a functioning civil society in the country which can consolidate the democratic institutions.

“As long as the European Union doesn’t pay official visits to Nagorno-Karabakh, we have to multiply our initiatives to strengthen the Parliamentary diplomacy between Artsakh and the European Union and its member states. The fact-finding missions that we organise aim to build bridges and promote the fundamental rights of the people in Artsakh. To give them voice is a top priority for us.”

Later, the delegation led by MEP Sonneborn visited the demining international organization in Nagorno Karabakh – the HALO Trust and the Tumo Center for Creative Technologies in Stepanakert.

On August 27, before arriving to Artsakh MEP Sonneborn and his team had a number of meetings in Yerevan, among them with MP Armen Ashotyan, chairman of the Committee on Foreign Relations of the National Assembly and the Armenian Prime Minister Nikol Pashinyan, with whom they discussed the new political situation after the peaceful transition of power in Armenia and a number of issues related to the stability and peace in the region.