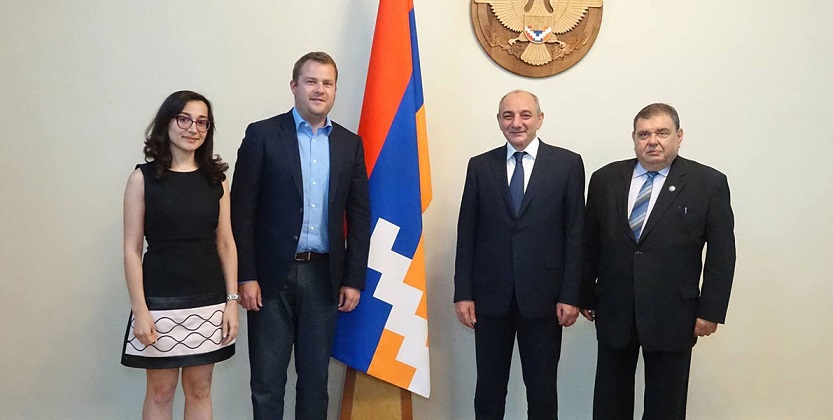 Joris Poschet, member of the Kingdom of Belgium Senate and Flemish Parliament, accompanied by EAFJD President Kaspar Karampetian and EAFJD European affairs officer Heghine Evinyan have headed to Rerpublic of Artsakh to hold political meetings with high representatives such as President Bako Sahakyan, Speaker of Artsakh Parliament Ashot Ghoulyan, Minister of Foreign Affairs Karen Mirzoyan and Minister of Culture and Youth Affairs Narine Aghabalyan. A range of issues related to Belgium-Artsakh parliamentary ties as well as cultural cooperation were on the agenda.

On his last two days in Artsakh, Senator Joris Poschet visited the Stepanakert memorial to pay homage to the fallen soldiers of the Nagorno Karabakh war.
Later on, he visited the HALO Turst in Nagorno Karabakh – the demining organization – and paid a visit to Artsakh airport on a study tour. He also had the chance to visit Artsakh Brandy Company and get acquainted with the types of production.
Mr. Poschet then visited the ancient city of Tigranakert, where he saw the excavations of the old Armenian city.
In Stepanakert, he visited the Tumo Center for Creative Technologies. Later on, he had the chance to pray in the Holy Savior Ghazanchetsots church in Shushi.

The Flemish parliamentarian’s visit to Nagorno Karabakh concluded with a press conference in Stepanakert. Poschet said of his visit:

“I had the honor to meet with the President of Artsakh, the Speaker of the National Assembly, the Deputies, Ministers of Foreign Affairs and Culture. These meetings gave me the opportunity to get acquainted with the challenges facing Artsakh. I must say that I was extremely happy to be here and if possible, I would definitely visit again in the future. I am delighted with the reception, nature and delicious food”.

Mr. Poschet’s visit was organised by the European Armenian Federation for Justice and Democracy.