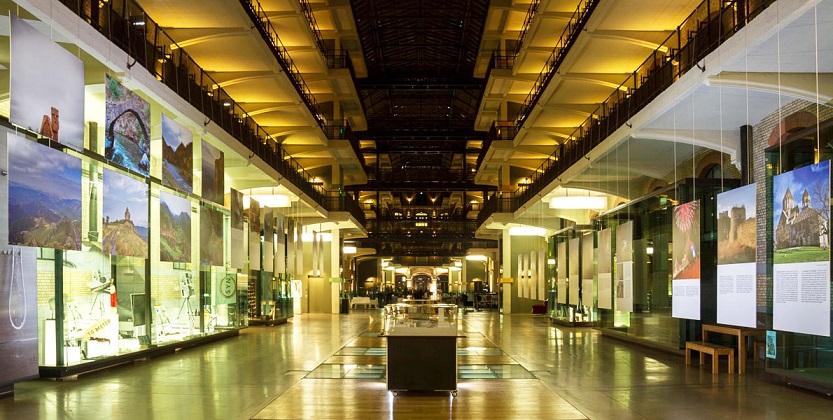 On the initiative of the European Armenian Federation for Justice and Democracy (EAFJD) a unique exhibition with the title “Artsakh/Nagorno-Karabakh Hidden Treasure” opened with a festive reception and a concert in the prestigious setting of “Tour&Taxi” in Brussels on 17 November. EAFJD cooperated also with Artsakh authorities in the preparatory work. The goal of the exhibition which will be open until 19 November is to showcase the significant potential of Artsakh as a tourist destination as well as attract investors and tourists. More than 200 guests, among who several Members of the Belgian Federal, Regional and Flemish Parliaments as well as representatives of academia and industry were present. The Presidents of the Friendship Group with Armenia and Artsakh in the European Parliament MEPs Eleni Theocharous and Frank Engel, who could not be present, sent video messages addressed to the guests and expressed their support for the people of Artsakh.

Main view of the exhibition at Tours & Taxis, Brussels

Opening remarks were made by EAFJD President Kaspar Karampetian and EAFJD EU Affairs Coordinator Heghine Evinyan after which the Permanent Representative of Nagorno-Karabakh to France Hovhannes Gevorgyan took the floor. The President of the French-speaking Parliament of Brussels Julie De Groote emphasized that

“Artsakh is not simply a hidden treasure, it is first of all a treasure that is loved”.

Ms. De Groote also underlined the counterproductive nature of the threats addressed to Belgian MPs, aimed at preventing them from going to the exhibition. The President of the Friendship Group with Armenia and Georgia in Belgian Federal Parliament Els Van Hoof also delivered a brief speech, congratulating the organizers and expressing her support.

“Despite the hysteria, the boycott calls and the threats of the Azerbaijani authorities, addressed among others to the administration of Tour&Taxis, this exhibition is successfully taking place, as the big interest and the high attendance of the guests testifies. This is yet another proof that the policy of Azerbaijani authorities to threaten and dictate European decision-makers, common citizens what to do, has failed,” said EAFJD President Kaspar Karampetian. “The people of Nagorno-Karabakh have rightfully chosen the path of self-determination, established a functioning, prospering state based on universal human rights and simply aspire to live in peace in their own homeland.

The European Armenian Federation will always unequivocally support the people of Artsakh in their just cause,” concluded Karampetian.