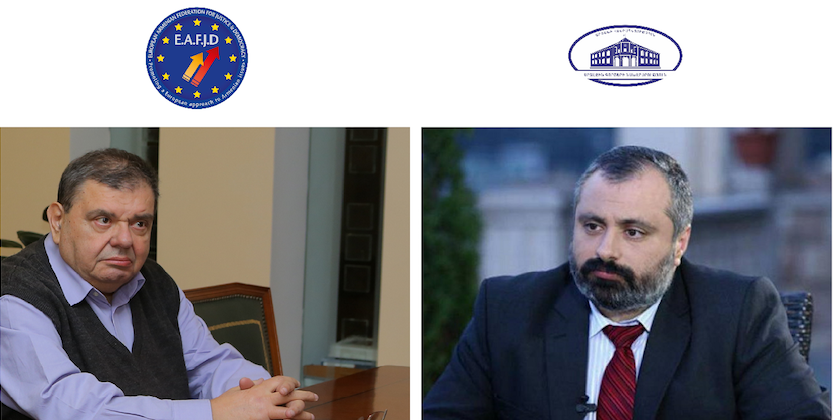 Brussels, 11 February: On the joint initiative of European Armenian Federation for Justice and Democracy (EAFJD) and the Ministry of Foreign Affairs of the Artsakh Republic/Nagorno Karabakh, Foreign Minister Davit Babayan paid a working visit to Brussels on 7-10 February.

During the visit, a cross-party Friendship Group with Artsakh was relaunched in the European Parliament with the broad participation of the Members of the European Parliament (MEPs) from the main political groups. The MEPs were thoroughly briefed on the current situation and challenges in Artsakh in the aftermath of the 2020 war, unleashed by Azerbaijan as well as the aggressive anti-Armenian policy/Armenophobia promoted by the Azerbaijani government and deeply rooted in its society in the past decades.

The Foreign Minister of Artsakh Republic held meetings with the members (senators) of the Armenia-Georgia Friendship Group in the Belgian Federal Parliament, the French-speaking Friendship group with Artsakh in Belgium, as well as with the members of the Friendship Group with Artsakh in the Flemish Parliament. Later, the Minister delivered a lecture for the students of one of the most prominent law schools in Germany. During the lecture the Minister elaborated on the Nagorno Karabakh conflict as well as the current situation. To conclude, the Minister met with representatives of the Armenian community of Belgium.

During all the meetings the Minister focused on the destruction and erasure of Armenian cultural heritage in the occupied territories of Artsakh by the Azerbaijani authorities, Azerbaijan’s state policy of history falsification as well as the necessity to actively fight against it.

Commenting on the visit, the EAFJD president Kaspar Karampetian stated:

“As European citizens we continue to actively work towards making the voice of the people of Artsakh heard among the decision-makers in Europe and sensitizing them about the aggressive policy of Azerbaijan. This visit of the Foreign Minister of the Artsakh Republic/Nagorno Karabakh to Brussels is thus of high importance also because it is his first visit to the EU capital in the post-war period”.

“The EU has the moral obligation to protect the values it claims to stand for and put effective pressure on the authoritarian regime of Azerbaijan to immediately end its destructive policies, including cultural genocide and history falsification”, concluded Karampetian.