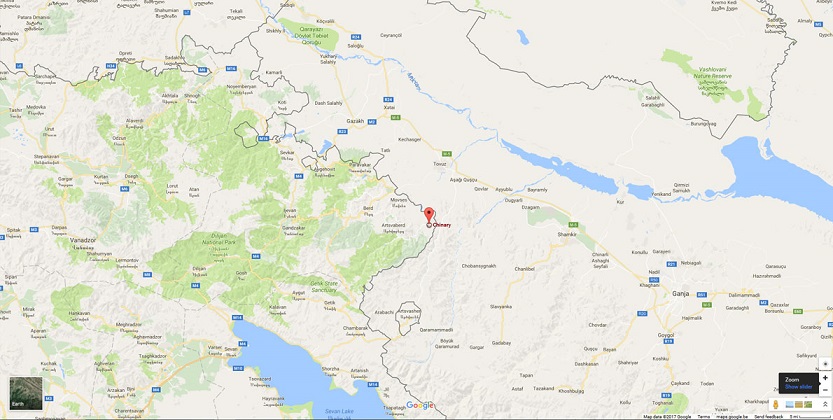 In the early hours of December 29, 2016, troops of the armed forces of Azerbaijan attempted a subversive penetration into the Republic of Armenia, in the North-East of the Armenian border, close to Chinary village, Tavush region. The Armenian ​army was​ very quick​ in regaining full control of the situation.

Unfortunately, the Armenian side suffered 3 losses of human lives. The international community must condemn Azerbaijan’s adventurism, which lacks all norms of international law and interest in regard to human lives. Azerbaijan and its ruling clan of the Aliyevs have become a threat to regional peace.
On April 2-5 2016, Azerbaijan launched a full-scale attack against Nagorno Karabakh Republic, causing the deaths of 104 Armenian soldiers and civilians. The Azerbaijani army effected unprecedented cruelties – decapitations and mutilations of hostages, soldiers and civilians. The OSCE Minsk Group Co-Chairs have repeatedly urged the two parts to accept the installation of independent monitoring mechanisms of ceasefire violations, agreed by both Armenia and Azerbaijan in Vienna and Saint Petersburg, respectively in May and June 2016. Azerbaijan as of yet refuses to adhere to those agreements. Armenia has also agreed to pull the snipers from the contact line, which Azerbaijan again refuses to do so. The Co-Chairs, need to address specifically to Azerbaijan as the side violating the ceasefire agreements.

Now, in an unprecedented attack against Armenia, Azerbaijan has suffered 7 losses itself, and is trying to mislead the international community as to who attacked. Armenian soldiers were killed in their posts, and at least one Azerbaijani body was found in Armenian positions.

It’s about time that the OSCE Minsk Group Co-Chairs, the CSTO and the EU relevant bodies, condemn Azerbaijan and stop calling both sides to refrain themselves. Such an approach, becomes more and more dangerous for a viable peace in the region and as long as aggressor Azerbaijan, is not named and threatened by sanctions, it will provoke more and more tension, which could lead to a full-scale war.

The European Armenian Federation for Justice and Democracy reminds once again its long-held position, that for peace negotiations to resume, the International Community must force Azerbaijan to sign a non-aggression pact with Armenia and curb its armaments race.

Kaspar Karampetian, President of European Armenian Federation, reminded the recent European Parliament’s delegation to Baku, to convince the Azerbaijani delegations to return to the Euronest Parliamentary Assembly and the ParliamentaryCooperation Committee, as well as the recent mandate of the Council of the European Union for the European Commission to negotiate a comprehensive agreement with Azerbaijan.

the leadership of the EU and its elected members shall uphold the numerous resolutions and decisions of Human Rights first in all foreign policy related issues, as well in its energy policy. The EU must not fall victim to its energy diversification plans and include Azerbaijan in the process, with its dubious reserves.

“We once more warn that, if Azerbaijan is not stopped by practical measures in continuing its aggressive and hatred policy against Armenia and Armenians, there will always be the threat of an uncontrolled escalation, which will have a domino effect in the region and beyond, with all its devastating results” concluded Kaspar Karampetian.