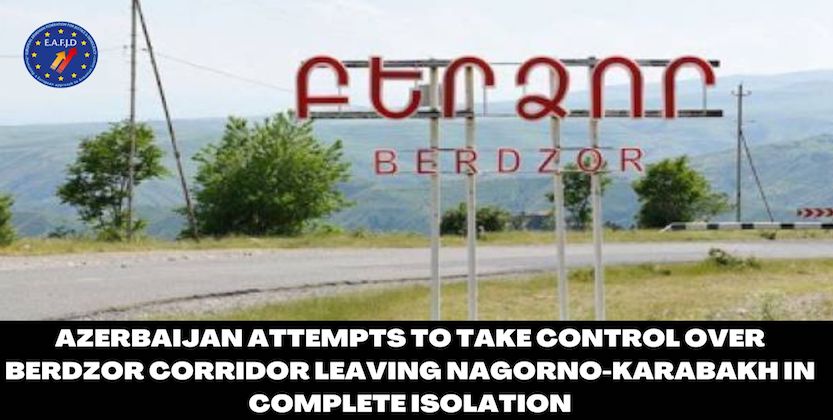 On August 3, at 09:00, Azerbaijani units grossly violated the ceasefire by using grenade launchers and UAVs in the direction of the positions of the Nagorno-Karabakh Defense Army in Yeghtsahogh, 1.5-2 km away from the Berdzor (Lachin) corridor, which connects the Republic of Nagorno-Karabakh with the Republic of Armenia. The corridor falls in the zone of the responsibility of the Russian Peacekeeping mission.

Azerbaijani units used attack drones on the northwestern section of the contact line, which resulted in the death of 2 servicemen of the Artsakh Defense Army. Gurgen Gabrielyan ad Arthur Khachatryan were killed, 14 more servicemen received injuries. The attacks of the Azerbaijani Armed forces are being carried out by the direct involvement of the Turkish Armed forces.

Azerbaijan is repeatedly violating the 9 November trilateral statement. This attack is an attempt to take control of the corridor of Berdzor (Lachin) and leave Nagorno-Karabakh/Artsakh in complete isolation, by cutting the Republic of Nagorno-Karabakh/Artsakh from the Republic of Armenia. The Russian peacekeepers are responsible of ensuring the de-escalation of the current situation.

The new wave of military aggression by Azerbaijan is yet another proof, that their claimed intentions for peace are false and dangerous. By the attempt of completely isolating the Republic Nagorno-Karabakh/Artsakh from the Republic of Armenia – Azerbaijan shows its true colors, which is the complete ethnic cleansing of the native Armenian population of Nagorno-Karabakh/Artsakh.

The EU must stop compromising its own values by ensuring its energy supply gap with a dictatorial regime at the expense of human lives. There should be international guarantees on preventing new aggressions and crimes by Azerbaijan on the native Armenian people of Artsakh/Nagorno-Karabakh, assuring the right of the people of Nagorno Karabakh for self-determination.

• To refrain from bothsidesism and call the aggressor by its name.
• To give a targeted assessment of Azerbaijan’s criminal actions and take concrete measures to cease the destructive policy of Azerbaijan.
• To put pressure on Azerbaijan to stop its ongoing policy of ethnic cleansing and aggression against the native Armenian population of Nagorno-Karabakh/Artsakh.
• To stop Turkey’s military involvement in the conflict, which aggravates the conflict and the instability of the region.