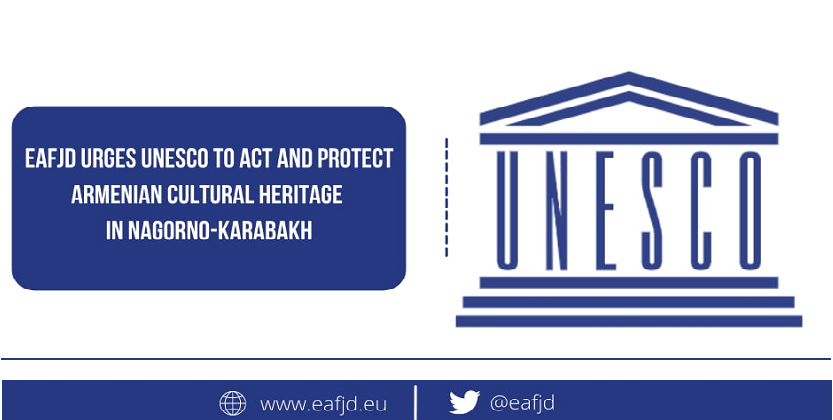 In an open letter to UNESCO’s director-general Audrey Azoulay and other responsible officials, EAFJD urges UNESCO to immediately deploy a mission to Nagorno-Karabakh and do everything in its capacity to prevent the destruction of millennia-old cultural heritage as well as history revisionism by Azerbaijan.
The letter refers to the European Parliament‘s resolution adopted on 10 March 2022 on the destruction of cultural heritage in Nagorno-Karabakh.
Open Letter:

Subject: European Parliament’s resolution on the destruction of the cultural heritage in Nagorno-Karabakh, call for action

I am writing to you on behalf of the European Armenian Federation for Justice and Democracy (EAFJD) – a pan-European grassroots organization with chapters in 13 Member states of the EU and representing a significant part of the of European citizens of Armenian origin.

I would like to invite your attention to the European Parliament’s recent resolution on the destruction of the cultural heritage in Nagorno-Karabakh which was adopted by overwhelming majority (635 in favour, 2 against, 42 abstentions) on 10. March 2022 (P9_TA(2022)0080).

The resolution “strongly condemns Azerbaijan’s continued policy of erasing and denying the Armenian cultural heritage in and around Nagorno-Karabakh, in violation of international law and the recent decision of the International Court of Justice”. The resolution also “acknowledges that the erasure of the Armenian cultural heritage is part of a wider pattern of a systematic, state-level policy of Armenophobia, historical revisionism and hatred towards Armenians promoted by the Azerbaijani authorities, including dehumanization, the glorification of violence and territorial claims against the Republic of Armenia which threaten peace and security in the South Caucasus”.

By this resolution, the European Parliament, representing over 500 million European citizens, ¨welcomes UNESCO’s proposal to send an independent expert mission and calls for it to be sent without delay¨. It also ¨strongly insists that Azerbaijan enable UNESCO to have access to the heritage sites in the territories under its control, in order to be able to proceed with their inventory and for Azerbaijan to ensure their protection¨.

We value UNESCO’s role in protecting cultural heritage and promoting culture as an instrument to bring people closer together and foster dialogue. We herewith urge the UNESCO to immediately deploy a mission to Nagorno-Karabakh, make an inventory of the religious and cultural heritage and thus do everything in its capacity to prevent the destruction of millennia-old cultural heritage as well as history revisionism by Azerbaijan.  The EAFJD and its members will closely follow the developments in this direction.