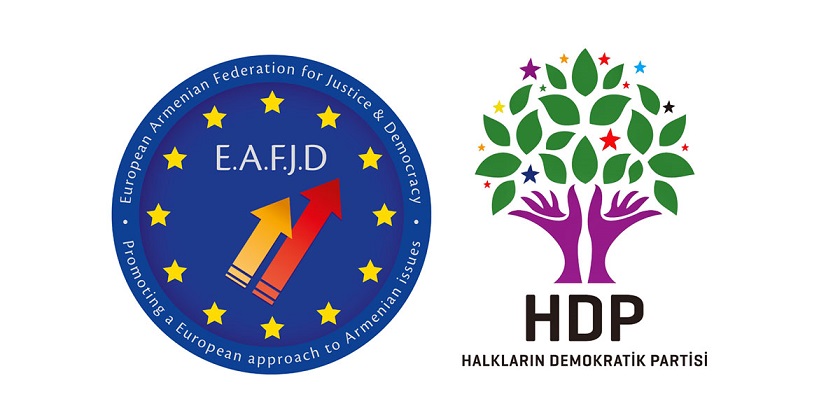 In solidarity with HDP, EAFJD condemns in the strongest terms the illegal arrests of HDP co-chairs F. Yuksekdag, S. Demirtas and nine deputies.

European Armenian Federation for Justice and Democracy (EAFJD) condemns in the strongest terms the illegal and targeted arrest of Peoples’ Democratic Party’s (Halklarin Demokratik Partisi, HDP) deputies, including the co-chairs of the party, Figen Yüksekdağ and Selahattin Demirtaş. Under the pretext of fighting terrorism, Turkish president Erdogan and his party, the AKP, have embarked on a very dangerous path, dragging Turkey into polarization and ethnic and social divisions. Since the Turkish parliamentary elections of June 2015, where HDP was trusted by a large segment of voters in Turkey and abroad and went ahead to win 80 seats, Erdogan and his circle started political and military persecutions against all those opposing AKP’s authoritarian grip on power. European Armenian Federation is deeply concerned with what’s happening in Turkey, and continues following the proceedings very closely and as long as Turkey refuses to accept its past and continues to try to be mono-ethnically governed, these issues will continue to deepen. Minorities and all segments of society shall have their rights respected and accepted.

“The International and European partners of Turkey must stop treating Erdogan as the democratically elected president of Turkey and face him as he really is: the authoritarian ruler of a country, playing with fire and endangering a whole, already volatile region”, said Karampetian.

“We welcome the Brussels court decision to recognize that a war is going on in Turkey and that the allegations of the Turkish state, that Kurds are terrorists, is false. In this context, it is about time, that the European Union and NATO see Erdogan’s Turkey in face value, a state sponsoring terrorism at home and abroad”, concluded Karampetian. Earlier in the day, a representation from the Armenian National Committee of Belgium and European Armenian Federation partook in the demonstration held in Brussels, in front of the European Parliament, organized by Kurdish organizations in Belgium. The European Armenian Federation in June and November 2015 had publicly endorsed the Peoples’ Democratic Party, HDP, in the Turkish parliamentary elections, stating that “HDP is a progressive force in Turkey which stands up for a well-functioning democracy and is actively struggling for peoples’ rights in their vernacular and with respect to their ethnic, cultural, religious beliefs and background”. A representation from the EAFJD was present at both of the elections of 2015 as short term observers