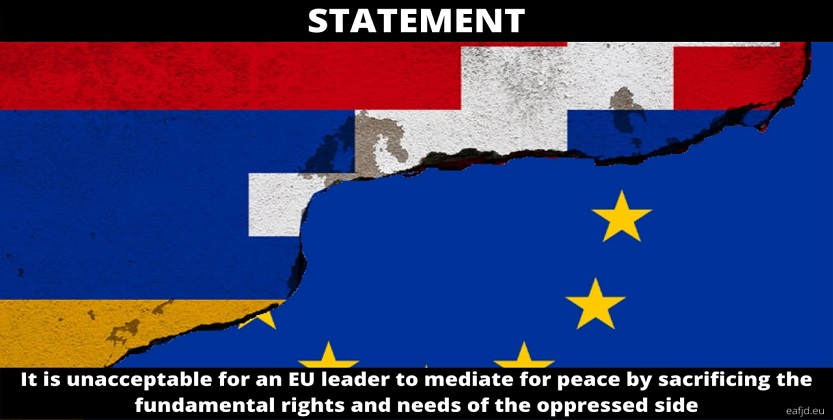 25 May 2022, Brussels: As a pan-European civil society grassroots organization the EAFJD and its committees, representing a significant part of the European citizens of Armenian origin, express their profound discontent with the recent statement of the President of the European Council Charles Michel following the trilateral meeting with the Armenian Prime Minister Nikol Pashinyan and Azerbaijani President Ilham Aliyev on 22 May, 2022.

Mediating for peace is necessary and welcome. Nevertheless, it is essential to ensure that peace is negotiated based on justice and not by cornering the side that has been a victim of vicious aggression of the tandem of two authoritarian regimes, such as Azerbaijan and Turkey which i.a. deployed jihadist fighters against the native Armenian population of Nagorno Karabakh. It is unacceptable for an EU leader to mediate for peace by sacrificing the fundamental rights and needs of the oppressed side.

Unfortunately, the recent statement of president Michel disregards key principles of EU’s documented approach towards the resolution of the Nagorno Karabakh conflict and overall endorses the Azerbaijani stance on the conflict resolution in some crucial aspects.

Deviating from the EU’s decade-long approach as well as that of all the relevant international documents, Charles Michel uses the vague wording “Karabakh” instead of “Nagorno Karabakh” which is a political entity with a defined territory. Thus, the President of the European Council repeats the narrative of the Azerbaijani President, insinuating that Nagorno Karabakh as an entity does not exist and is genocidal in its essence.

In March 2022, the European Parliament adopted a resolution by overwhelming majority on the ongoing destruction of the Armenian religious and cultural heritage in Nagorno Karabakh, acknowledging that “the erasure of the Armenian cultural heritage is part of a wider pattern of a systematic, state-level policy of Armenophobia, historical revisionism and hatred towards Armenians promoted by the Azerbaijani authorities”. Using the term Karabakh is clearly a part of the ongoing Azerbaijani policy of ethnic cleansing against the indigenous Armenian population of Nagorno Karabakh and is genocidal in its essence.

We herewith remind Mr. Charles Michel that in his capacity as the President of the European Council he should base the mediation on the following facts and aspects:

The EAFJD also expects from the Armenian Government to insist on all the above-mentioned aspects during the negotiations.