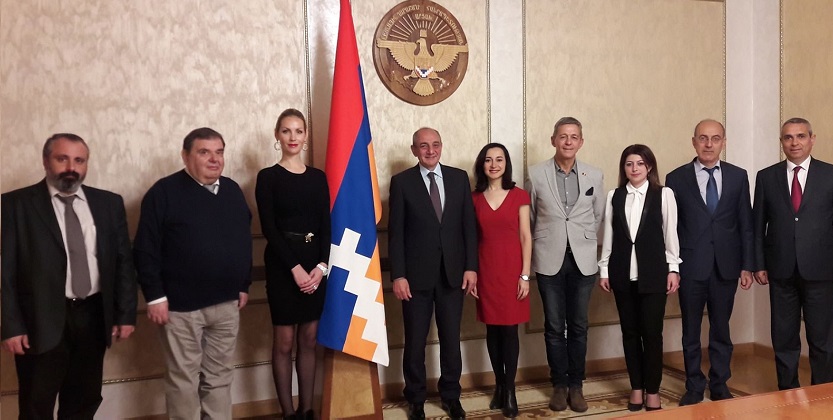 From 29 October – 1 November, member of the Belgian Federal Parliament and president of “Mouvement Réformateur International (MRI)” Jean-Jacques Flahaux and vice president of MRI Julie Szmaj were in Armenia and Artsakh on a fact-finding mission, accompanied by EAFJD President Kaspar Karampetian and EAFJD executive director Heghine Evinyan.

The delegation led by Flahaux held several meetings with statemen such as the President of the Republic of Artsakh Bako Sahakyan, the speaker of National Assembly of Artsakh Republic Ashot Ghoulyan, the Minister of Foreign Affairs Masis Mayilyan and the Minister of Culture, Youth Affairs and Tourism Lernik Hovhannisyan.

During the meetings, the significance of such fact-finding missions was emphasized, as a means of obtaining first-hand information about the reality in Artsakh and the democratic developments in the country. Speaking about the issue of the Azerbaijan – Nagorno Karabakh conflict, the parties highlighted the crucial necessity of the future participation of Artsakh authorities in the negotiation process in order to obtain a peaceful and sustainable solution to the conflict.

“No one has the right to decide on behalf of the people of Artsakh. Without taking into consideration the will of the population living here (ed: Artsakh Republic), any proposed solution will be unacceptable. The people of Nagorno Karabakh have exercised their right to self-determination in 1991. They decided to build an independent state, with democratic institutions, a functioning civil society and army. With the increasing level of Armenophobia in Azerbaijan and the continuous threats of war against the Armenian population, it is inconceivable to even imagine Nagorno Karabakh as an administrative part of Azerbaijan”, stated EAFJD President Kaspar Karampetian.

Flahaux and Szmaj met a number of deputies representing all the political factions in the Artsakh National Assembly, where a range of issues related to Belgium-Artsakh parliamentary ties as well as cultural cooperation were on the agenda. The delegation also visited the Stepanakert memorial to pay homage to the fallen soldiers of the Nagorno Karabakh liberation war, the Tumo Center for Creative Technologies (TUMO) and HALO Trust – an international demining organization in Nagorno Karabakh.

The Belgian delegates concluded their visit to Artsakh with a press conference in Stepanakert. Jean-Jacques Flahaux emphasized the counter-productive and absurd nature of the threats from the Azerbaijani side and expressed his firm determination to support the people of Artsakh. Julie Szmaj said that they were touched by the visit to HALO Trust and impressed by TUMO. Referring to TUMO she stated that Belgium had something to learn from Artsakh.

“Mr. Flahaux is the 23rd Belgian deputy who has visited Artsakh in the last 3 years. More European political leaders should do the same. The goal is to build bridges, promote the fundamental rights of the people in Artsakh, and fight against the geopolitical, social and economic isolation imposed by the Azerbaijani authorities on the people Artsakh”, concluded Karampetian.