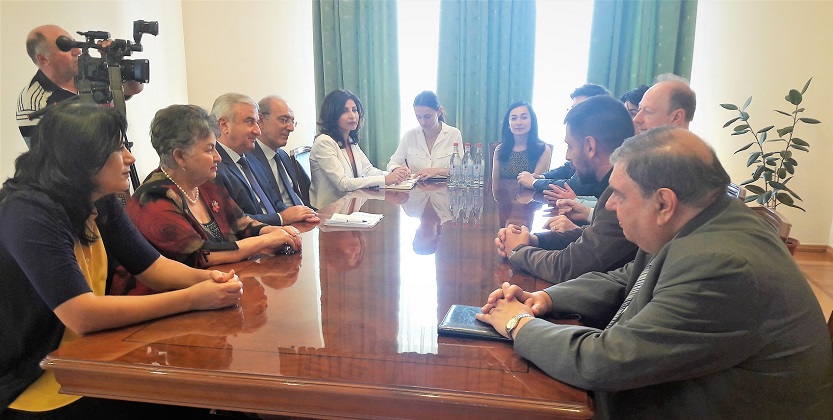 After his first fact-finding mission in Artsakh/Nagorno-Karabakh in August 2018, Member of the European Parliament (MEP) Martin Sonneborn (Germany) is in Artsakh again.This time he is leading a delegation of 25 members, among them a number of German professors, writers, journalists and Die Partei members. The delegation is accompanied by the president of the European Armenian Federation for Justice and Democracy (EAFJD) Kaspar Karampetian, executive director Heghine Evinyan and project manager Ashkhen Fixova.

On August 26, the delegation was received by the Speaker of the National Assembly of Artsakh Republic Ashot Ghoulyan and met the members of the “Friendship Group with Europe” of Artsakh parliament.

During the meetings, the significance of such visits was emphasized as a means of fighting against the isolation imposed on the people of Artsakh by Azerbaijan. The German participants of the delegation were particularly interested in state-building in Artsakh, the state of democracy and the challenges the country is facing.

The delegation also visited “The HALO Trust”- an international demining organization in Nagorno Karabakh. Later on, members of the delegation Torsten Gaitzsch, Oliver Maria Schmitt and Dr. Jurgen Kuttner delivered a public lecture on the aspects of the reunification of Germany and political satire, with the example of one of the most famous satirical magazines in Germany “Titanic. The presentations were followed by a lively Q&A session with the audience, mostly young people from Stepanakert

“Last year, during his first visit MEP Martin Sonneborn promised to come back to Artsakh with a much bigger group in order to directly interact with its population and here we are with a group of 25 German intellectuals. We are very glad to participate in this initiative taken by MEP Sonneborn which will help to considerably reinforce the bridges existing between the two peoples and create new ties.

“This visit is also a clear message to that the Azerbaijani policy of isolating Artsakh people and threatening its visitors is an absolute failure. In fact, during our meeting with the political leaders today, we learned that the number of the foreign visitors to Artsakh was as high as ever in 2019. This is a great sign, but insufficient. But, it is high time for the international political leaders and especially the EU officials to follow Sonneborn’s example and visit Artsakh, interact with its people, listen to them and contribute in the defense of their fundamental rights.”

During the next days, the delegation members will meet the Minister of Foreign Affairs of Artsakh Republic Masis Mayilyan and pay a visit to the Stepanakert airport on a study tour, which despite being fully functional is not being used because of the threats of the Azerbaijani government to shoot down civilian airplanes. The guests will have an opportunity to enjoy some of the touristic and cultural venues of Artsakh such as Hunot Canyon, Ghazanchetsots Cathedral and the modern Art gallery in Shushi town and taste some of the prominent local products such as the Kataro wine during a visit to the factory in Togh village.

Before arriving to Artsakh, on August 25, the German delegation paid tribute to the 1,5 million victims of the Armenian Genocide at the Tsitsernakaberd Memorial in Yerevan. To conclude the visit, Martin Sonneborn’s team will also be received by the president of the National Assembly of the Republic of Armenia Ararat Mirozyan.