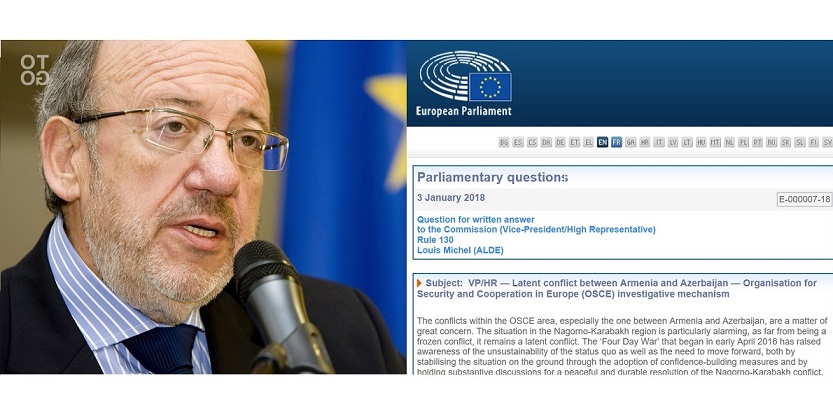 The European Armenian Federation for Justice and Democracy (EAFJD) welcomes the initiative taken by the Belgian MEP Louis Michel (ALDE), to address two written questions to the European Commission and the High Representative Federica Mogherini, raising the issue of the extension of the Erasmus+ program to students from Nagorno-Karabakh/Artsakh, as well as the implementation of investigative mechanism on the line of contact between Nagorno-Karabakh and Azerbaijan.

In his first written question, Louis Michel raises the issue of the prohibition of Artsakh students from the Erasmus+ program, whereas university students of all the six Eastern Partnership nations have access to the program, and are allowed to complete a part of their studies in Europe.

“The current status of Nagorno-Karabakh/Artsakh should by no means be, an excuse to increase the social isolation of the people of Artsakh, especially the students and the youth. The ultimate goal being peace in the region, young people of Nagorno-Karabagh should have the same rights as the youth in the other six Eastern Partnership countries. In this regard, the written question of Louis Michel is an important first step, to sensitize the public and raise this essential issue to the EU decision makers,” stated EAFJD President Kaspar Karampetian.

In his second question, the Belgian MEP appealed the High Representative of the EU Federica Mogherini to clarify how the Union intends to assist in enforcing the ceasefire and putting in place the OSCE investigative mechanism.

“The investigative mechanism on the line of contact is a confidence building measure proposed by the OSCE, years ago. It would enable to find out which side violates the ceasefire. The Azerbaijani government keeps refusing its implementation, while Armenia has agreed from the beginning. The European Union should be concerned about the systematic refusal from the Azerbaijani side, which leads to deadly losses. We are glad to see European Parliament members speaking out about this issue,” said Karampetian.

In order to facilitate the peace process in Nagorno-Karabakh the EAFJD encourages more European Parliament members to raise these issues, and will follow carefully the response of the European Commission and the European External Action Service, within 6 weeks at the latest.

Here are the links to the written questions by MEP Louis Michel.