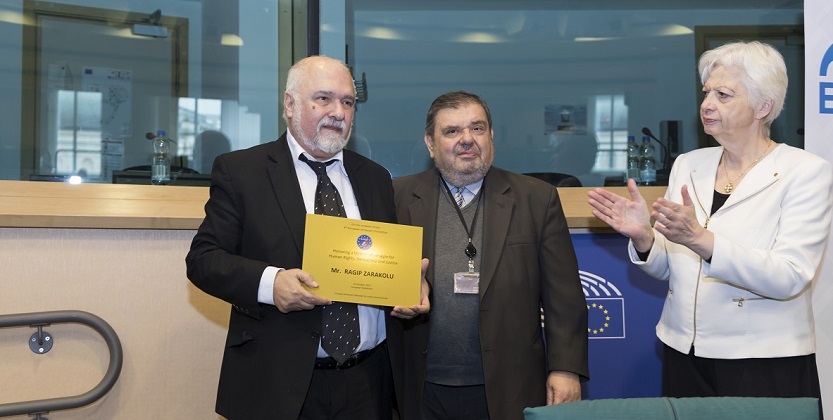 The EAFJD is proud to honour Ragip Zarakolu for his lifetime struggle for human rights, democracy and justice.

Ragip Zarakolu is a Turkish human rights activist and publisher. For many years Mr. Zarakolu has been fighting for freedom of expression in Turkey.

At the end of 1970s he established the publishing house “Belge”, which for decades published books on sensitive subjects in the Turkish society, such as the Armenian Genocide, human and minority rights. Mr. Zarakolu has been subjected to politically motivated persecutions for the publishing activities of “Belge”, which has always been a focus for Turkish censorship laws.  Charges brought against Zarakolu resulted in his imprisonment as well as in the wholesale confiscation and destruction of books and the imposition of heavy fines.

Ragip Zarakolu has published several books on the Armenian Genocide, such as “The Truth Will Set Us Free: Armenians and Turks Reconciled” and “An Armenian Doctor in Turkey: Garabed Hatcherian: My Smyrna Ordeal of 1922”, which brought new criminal charges against him in 2005. In November 2007 Zarakolu published “Massacres, resistance, protectors” about the Assyrian Genocide.

Mr. Zarakolu is one of the 98 founders of the Human Rights Association of Turkey. In 2007 he received International Association of Genocide Scholars award. In 2012 Ragip Zarakolu was nominated for the Nobel Peace Prize by the Swedish Parliament.