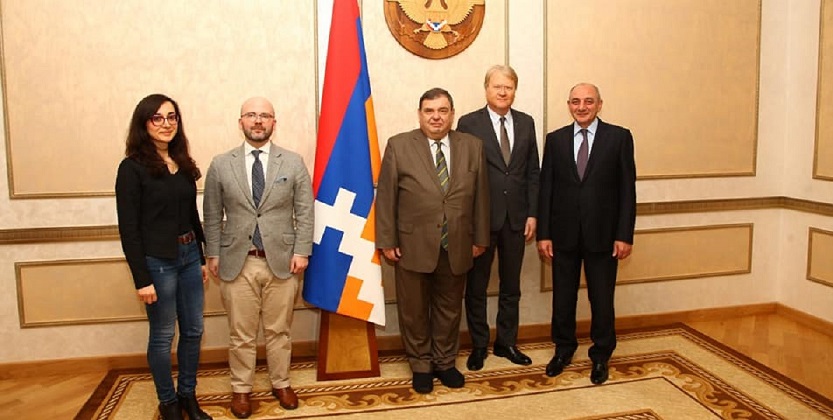 On the initiative of the European Armenian Federation for Justice and Democracy (EAFJD), Member of the European Parliament (MEP) Lars Adaktusson (EPP, Sweden) and his chief of staff Charlie Weimers are on a fact-finding mission in Artsakh/Nagorno-Karabakh.

Within the framework of the visit, MEP Adaktusson and his head of staff have been received by the President of  the Republic of Artsakh Bako Sahakyan, Minister of Foreign Affairs Masis Mayilyan and Speaker of the National Assembly Ashot Ghulyan. Mr. Adaktusson and Mr. Weimers also had an exchange of views with Members of the cross-party “Friendship Group with Europe” of Artsakh National Assembly.

During the meetings, the significance of such fact-finding missions was emphasized, as a means of obtaining first-hand information about the reality in Artsakh and the developments in the country. It was stressed that no sustainable solution to the conflict could be found without actively engaging the people of Artsakh in the peace process and without listening to them. One of the focal points raised, was the importance of confidence-building measures, in particular the OSCE investigative mechanism which would significantly reduce the tension. The Armenian side expressed its full support for this confidence building measure, stating that it would prevent casualties and be a basic precondition for a meaningful dialogue.

“Parliamentary diplomacy is an essential tool to break the isolation imposed on the people of Artsakh, give them voice, fight disinformation and create possibilities of cooperation. Building bridges and promoting the fundamental rights of the people in Artsakh are a top priority for us.”

The fact-finding mission will continue until 27 January and will enable the Swedish delegates to deepen their insight into the current developments in Artsakh.