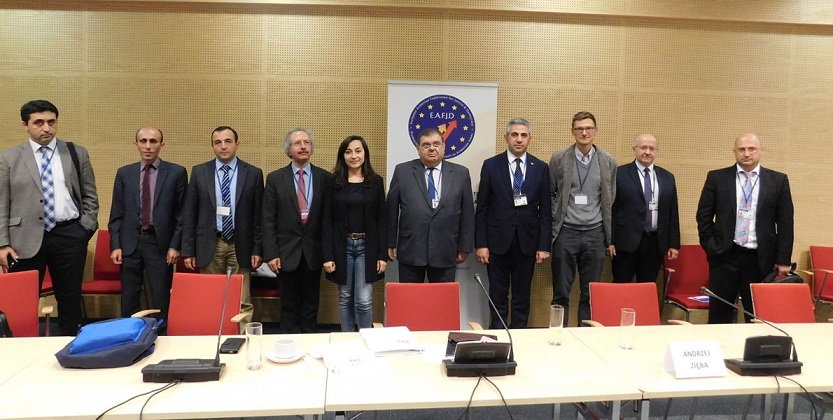 From 18 to 22 September 2017, the European Armenian Federation for Justice and Democracy – EAFJD took part in the 20th OSCE Human Dimension Implementation Meeting (HDIM) in Warsaw, Poland. HDIM is the largest annual Human Rights conference in Europe.

Alongside the conference, NGOs had the chance to organize side events to provide an opportunity for participants to discuss issues that have not been fully covered during the working sessions. Therefore, EAFJD wanted to make sure that the issue of Human Rights of the people of Artsakh takes the place it deserves in the discussed topics during the conference, by organizing a side event entitled “Nagorno Karabakh up close: between fire and hope”. The guest speakers of the event were: Artak Beglaryan; Spokesman to the Prime Minister of Republic of Artsakh, Andrzej Zięba; historian and head of the Chair of Ethnic Relations in Europe at the Institute of Ethnology and Cultural Anthropology, Jakub Osiecki; lecturer and researcher at Jagiellonian University and Ara Sayegh; President of the Armenian National Committee of Poland. The side event featured the screening of “The Besieged” documentary film as well, which is a unique insight into the situation in Stepanakert in the years 1991-1992 and the daily life of people there, shortly after the bloody war erupted.

Besides the side event, EAFJD representative Heghine Evinyan made a statement at the Plenary session of the HDIM conference, raising the issue of the isolation of the people of Nagorno Karabakh.

“The unresolved conflict cannot serve as an excuse for the political, economic and social isolation of the people of Artsakh imposed by the Azerbaijani authorities. Fundamental rights are the same for everyone and do not depend on the status of a country” said Evinyan.

During the same week, members of the Armenian community of Poland were celebrating the 650th anniversary of the establishment of Armenians in Poland. Along with the Armenian National Committee of Poland, the EAFJD participated in the celebrations at the St. Jacek church, where the members of the Armenian community gathered to attend a Mass on Monday the 18th. The next day, EAFJD staff attended the “Polish Armenians: seven centuries of existence” conference, in the Polish Senate, where EAFJD president Mr. Kaspar Karampetian delivered a welcoming speech. Among the guests of honor and speakers of the conference were, Piotr Glinski; the Vice Prime Minister and Minister of Culture and National Heritage of Poland, Jana żaryna, Stanislaw Karczewski and Jerzy Fedorowicz; members of Polish Senate, Edgar Ghazaryan; Ambassador of the Republic of Armenia to Poland and Andrzej Kajetan Wroblewski; Vice-President of the Polish Academy of Arts and Sciences.
During the conference professors Krzysztof Stopka and Andrzej Zięba were decorated by the Minister of Culture.