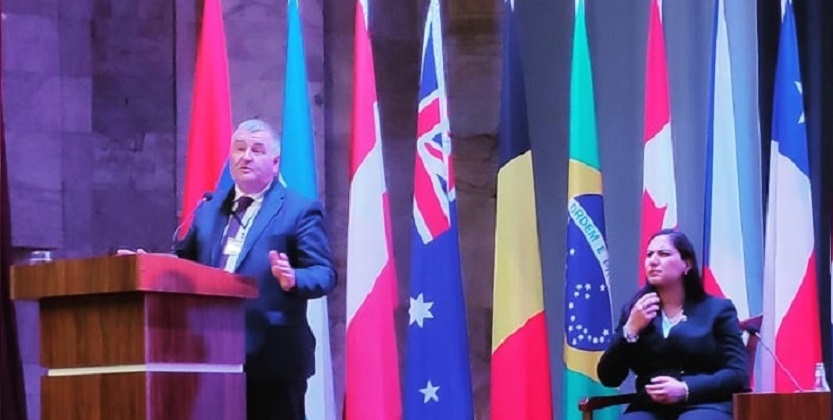 On the initiative of the European Armenian Federation for Justice and Democracy (EAFJD), a delegation representing the Friendship group between Dutch-speaking Belgian parliamentarians and Artsakh Republic paid a visit to Artsakh (Nagorno Karabakh) to participate in the Pro Artsakh Forum taking place in Stepanakert on 11 October 2019. Among the members of the delegation were Belgian Senator Mark Demesmaeker; First Deputy Mayor of the Belgian city of Aalst, former MP Karim Van Overmeire; member of City Council of the Belgian city of Mechelen, former MP Marc Hendrickx.

The forum entitled “Pro Artsakh Forum: Cooperation for Justice and Peace” brought together more than 150 political and public figures from over 30 countries. The forum aims at expanding and strengthening the decentralized cooperation of the Republic of Artsakh with various administrative entities in different countries, giving a new impetus and practical nature to the existing international relations of Artsakh. The forum was jointly organized by the Artsakh Foreign Ministry and the ARF Dashnaktsoutioun – International Affairs office.

On behalf of the Friendship group, Karim Van Overmeire and Mark Demesmaeker delivered speeches during the Pro Artsakh Forum.

highlighted the Belgian Senator in his speech. First Deputy Mayor of Aalst, Karim Van Overmeire was awarded a medal of “Gratitude” by the President of Artsakh Republic Bako Sahakyan, for his assistance shown to Artsakh and its people.

The Flemish delegation was also received by the minister of foreign affairs of Artsakh Masis Mayilyan. During the meeting, the sides discussed a range of issues related to the Artsakh-Belgium cooperation agenda.

Within the framework of the Forum, Karim Van Overmeire visited a secondary school, a cultural center and a sports school in the town of Karvachar in the Shahumyan region. The aim of this visit was the strengthening of the friendly ties already established between Aalst and Karvachar towns in July 2019, when a delegation from Artsakh consisting of Gagik Martirosyan, Head of Shahumyan administrative region and Sergey Chilingaryan, Mayor of the town of Karvachar was invited to the city of Aalst.