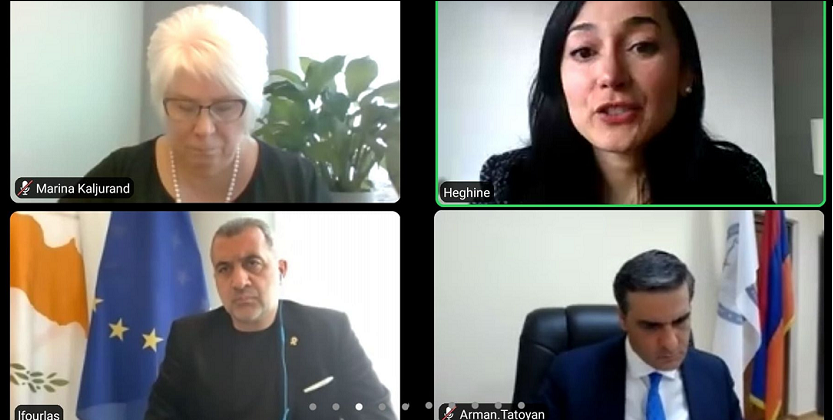 A conference addressing the legal and political aspects of one of the most urgent humanitarian issues after the 2020 Karabakh war, that of the Armenian captives and prisoners of war (PoWs) held in Azerbaijan was hosted by the Member of the European Parliament (MEP) Loucas Fourlas (Cyprus, EPP). The executive director of the European Armenian Federation for Justice and Democracy (EAFJD) Heghine Evinyan was one of the key-note speakers of the conference. The other panelists were MEP Marina Kaljurand – the Chair of the delegation for relations with the South Caucasus in the European Parliament and Arman Tatoyan – the Human Rights Defender of Armenia. Five months after signing the ceasefire statement of the war in Nagorno Karabakh/Artsakh there are still at least 188 Armenian captives in the prisons in Azerbaijan, despite the obligation of the latter to return all the captives, detainees and prisoners war.

In her speech, the EAFJD executive director Heghine Evinyan stressed that keeping the Armenian captives months after the end of the war is an act of prolongation of the war from the psychological perspective by Azerbaijan. “It is the continuation of the destructive consequences of the war. Human beings even if they are in captivity cannot be used as an object of political trade-off in order to elicit more gains”, said Evinyan.

“The silence and the rather passive stance of governments on the European level concerning a humanitarian issue such as the release of the prisoners of war, has been disheartening for the Armenian diaspora across Europe and in fact for anyone who cares about the issue and about human dignity, ” further elaborated Evinyan.

In his speech MEP Loucas Fourlas, who is also the Chair of the Friendship group with Armenia in the European Parliament, emphasized:

“The tragedy of missing persons, like the one affecting Cyprus since 1974, must not be repeated in Nagorno Karabakh. The international community must ensure the return of all the prisoners quickly. ”

During the conference it was stressed that the detention and ill-treatment of the Armenian captives by Azerbaijan is a war crime, as all the Armenian captives are legally considered as “Prisoners of War” in accordance with the 1949 Geneva convention. By blatantly violating the Convention and basic human rights principles, Azerbaijan uses this overly sensitive humanitarian issue for gaining political benefits. The release of all prisoners of war, hostages, and other detainees is stipulated by the ceasefire concluded on 10 November 2020 by the leaders of Armenia, Azerbaijan and Russia. The Armenian side has returned all the prisoners of war.

The conference entitled “The Fate of the Armenian captives in Azerbaijan”, took place in an online format, considering the restrictions due to the global health emergency.